Certainly amongst the most distinctive buses to run in the UK in recent years were the ten Designline Olymbus operated for NEXUS by Stagecoach.

Built in New Zealand by Designline, a company established in Ashburton in 1985, the ten UK buses were very similar to a trio of buses supplied to Park Island Transportation in Hong Kong, all thirteen being of the Olymbus Mk 2 HEV model.

I have managed to unearth some technical specifications for the Hong Kong buses which hopefully will also apply to the UK buses.

Designline apparently used MAN chassis frames, fitting a Series-Hybrid drive system by KEB of Schreeberg, Germany. The “engine” was actually a diesel fuelled micro-turbine Auxiliary Power Unit manufactured by Capstone Turbine of Chatsworth, California in the USA. This micro-turbine rotated at an astonishing 96,000 rpm to charge the batteries. This may explain the very high pitched whistling noise audible when I rode on one of the Olymbus’s from Newcastle Central to Gateshead.

Both of my photographs were taken on 21st May 2010, not too long before the contract for the Quaylink services changed from Stagecoach to Go Ahead. Optare Solo’s were used by Go Ahead, and the Olymbus’s were stored, but did not re-enter service. 61002 was seen departing Newcastle Haymarket bus station, while 61006 was in Sandhill near Newcastle Guildhall.

Steady progress is being made with the major restoration of 100, the 1949 built former Sunderland Corporation Crossley ABR 433. This has been made possible with a National Lottery Heritage Fund grant, but an amount of matched funding will still have to be raised.
It has been stripped of all glass, internal and external fittings, all external panelling and the lower deck floor has been removed. The rear bulkhead was corroded, as was part of the front bulkhead and drivers cab. All the lower deck pillars required remaking and new stress panels manufacturing. The decision was taken to remove the entire top deck to allow the upper deck floor to be examined. The staircase was found to be severely corroded and requires remaking. The entire drivers cab has been remade and the front bulkhead repaired and strengthened. The chassis is now accessible.
The original pillars had zig-zag strengthening and replacement to a total length of 150 ft. proved very labour intensive and delayed the project. The zig-zags were hand-bent every three inches and spot welded inside the new pillars. The new pillars were powder coated in black and wood inserts are being fitted. The pillars forward of the rear axle have been bent inwards (tumblehome) and required specialist skills to roll-bend to the required profile.
New body bearers have been manufactured and are connected to the outer framing by new rubber containing flexible couplings, to allow some body movement when cornering. The old couplings had completely disintegrated.
All these improvements have restored the structural integrity of the lower deck frame.
Restoration continues apace, and hopefully we will see a nearly new Crossley on the road towards the end of this year!
Any donations towards the required matched funding to complete the restoration will be gratefully received. 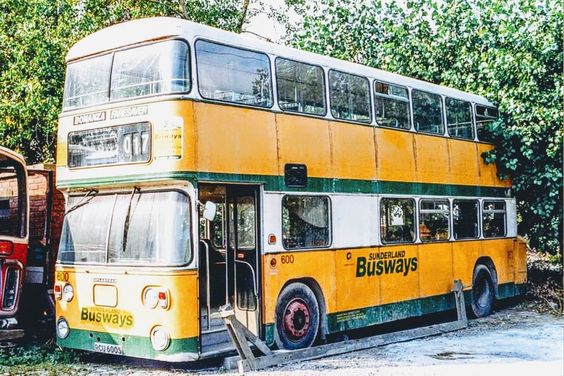